A short break in NYC with Virgin Atlantic

On Wednesday 17th September 2019, Rachel, Virgin Atlantic Flightstore Sales Manager headed to The Big Apple with Virgin Atlantic to celebrate the launch of the revolutionary A350.

Rachel began this trip in the Virgin Atlantic Club House, T3 LHR enjoying one or two of the signature Red Head cocktails alongside a A350 branded cupcake baked by Eric Lanlard himself!  This was followed by a trip to the Bombay Sapphire bar which served customised Gins which you could experiment whilst taking in the views from the outdoor viewing area. 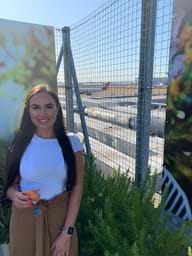 Like the Virgin Atlantic Clubhouse, once onboard the A350 the service was exceptional and did not disappoint. Rachel was fortunate enough to be one of the first Virgin Atlantic staff onboard this special Red Velvet A350 celebrational flight.

The flight ‘flew by’ with endless entertainment options from the onboard magician, your very own 18.5-inch touch screen to binge over 100 hours of tv, movies and games, you can stay connected with its inflight connectivity or indulging in their onboard dining which is second to none... including Eric Lanlards Mile High Tea Club! 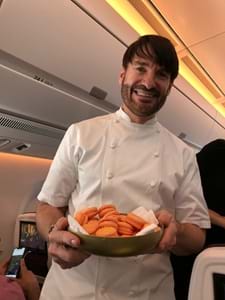 When arriving in NYC, Rachel stayed in The Moxy Time Square, best described as a paradigm for a new boutique social hotel in the heart of the hustle and bustle of NY, offering everything you could possibly need with an added bit of quirkiness!

Of an evening, The Moxy Hotel’s rooftop bar is a great venue to take in the views of the Empire State skyline whilst making the most of the Magic Hour cocktails and nibbles.

The next morning, Rachel met with Shai Waiss, CEO of Virgin Atlantic for breakfast where he provided the group with the VS’s updates and Company plans.  Shai was also excited to reveal the new potential route network expansion from London Heathrow T3 in 2020 which was proposed earlier in the week.

Later that morning, Rachel attended the Virgin Voyages showcase, which was a great opportunity for the First Mates (trade partners) to learn more about Virgin’s new take on cruising and what the ‘Sailors’ will expect to experience onboard.

After a great morning hearing about all of Virgin’s new ventures; Rachel had some free time to explore NYC and try some of the great American cuisine at the Black Tap in Soho-which did not disappoint. The group then headed to Times Square to take some iconic NYC pics and soak in the incredible atmosphere. 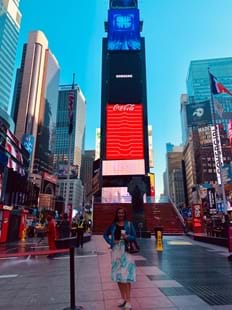 Keeping things Virgin- The group headed out for dinner at COTE, a Korean BBQ Michelin starred restaurant which inspired one of the restaurants onboard Virgin Voyages, Scarlett Lady- followed once again by some evening drinks on the roof top bar.

On the last day, Rachel took a walk along ‘The High Line’; a garden which is assembled on an old subway line, maintained by volunteers which is a great place to take in the views of NYC. This was followed by some obligatory retail therapy which of course, NYC is renowned for!

After a great few days in NYC, Rachel was fortunate enough to be heading home in Virgin Atlantics new Upper-Class Suite onboard Mamma Mia- The second A350 which was just 3 days in service. Onboard Rachel has her own ‘private booth in the sky’ and had the privilege to explore the loft space where she could socialise with the rest of the group mid-flight.

Rachel described the flight to be the quietest, smoothest flight ever and she genuinely wouldn’t have even known they had taken off if it wasn’t for watching it on the tail view cam!

Rachels highlights of the A350:

Out of Hours service - Free of charge